The center of Buenos Aires, also known as Downtown Buenos Aires or Centro, is not one neighborhood but rather an area made up of the San Nicolás, Balvanera and Montserrat neighborhoods. The sum of these three neighborhoods adds up to a rich diversity of space, contrasting architectural styles, historic places and cultural, gastronomical and commercial experiences.

The principal avenues of the city are found in this area, and these avenues offer a great variety of tourist attractions. 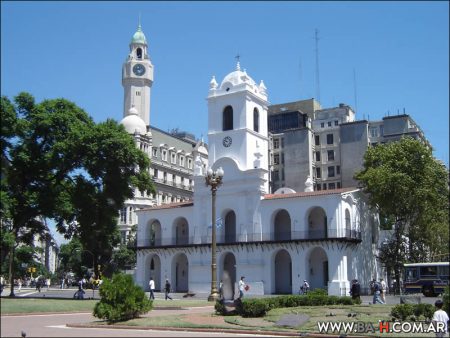 The Plaza de Mayo is the scene of the most important political events of our history. It has always been a space for political demonstrations and a meeting place for citizens who want to be heard.

In the center of the Plaza is the first historic momunent of the city of Buenos Aires, the Pirámide de Mayo, created to conmemorate the 1810 Revolución de Mayo (the beginning of Argentine independence).

Surrounding the Plaza are the most important buildings of our country: la Casa Rosada (the Pink House, also known as Government House), the Metropolitan Cathedral, the Cabildo, the National Bank and the building that houses the government offices of the city of Buenos Aires.

Why pink? In 1873, President Sarmiento gave an order to paint the The Pink House using a mixture of lime and blood from the slaughter houses (a paint mixture often used at the time). Standing guard in the doorway are two soldiers of the Regiment of Mounted Grenadiers of General San Martín.

The oldest subway of the city (and of Latin America) the A line begins in Plaza de Mayo. It still has the original wooden cars, now restored to their original condition. 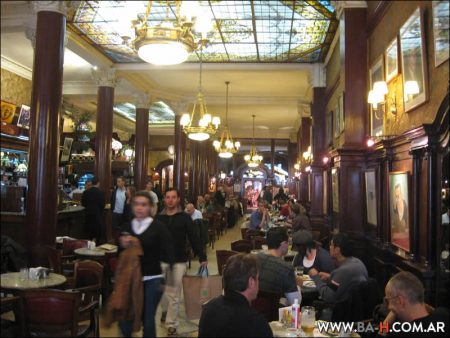 The first avenue of the city of Buenos Aires is born in Plaza de Mayo. This is the Avenida de Mayo, and it has many attractive features. The Avenida de Mayo unites Government House to Congress. We recommend that you walk from one end to the other so as to enjoy the architectural gems that you will find on each block.

You should definitely plan to stop at the Café Tortoni, the city’s most famous café and the oldest in the country. Sit down at one of its marble-topped tables and enjoy a rich cup of coffee or hot chocolate. You may be sitting at the same table as one of its illustrious visitors- Hillary Clinton, King Juan Carlos Borbón, Carlos Gardel, Joan Serrat, Ernesto Sábato or Jorge Luis Borges. The Café offers tango shows and houses the Academia Nacional de Tango on its top floor.

As you continue your journey towards Congress, you will see the Teatro Avenida, the 36 Billares Bar, and the Palacio Barolo, inspired by Dante Alighieri’s “The Divine Comedy” ; its architectural beauty, full of hidden symbols, is well worth a picture. The Palacio Barolo has a passageway that connects it to other businesses.

At your journey’s end, you will arrive at the Plaza de los Dos Congresos where you will find the 0 kilometer marker, where the national highways begin. In front of the Plaza is the Palace of the Congress of the Nation, a beautiful building that houses the Legislative Branch of the government, full of magnificent chambers and the most complete library in the country.

The Avenida de Mayo is crossed by the 9 de Julio Avenue, famous for being the widest in the world and for its central plazoleta where you will find the city’s most famous monument, the Obelisco, erected in the place where the Argentine flag flew for the first time and constructed to conmemorate the fourth centenary of the founding of Buenos Aires.

The Obelisco is 67,5 meters high and weighs 170 tons. Corrientes Avenue crosses the Plazoleta also. Taking a picture of the Obelisco is indispensible for all visitors who come to Buenos Aires.

Here This extensive avenue is born at the River Plate (at Avenida Eduardo Madero) and goes all the way to the Chacarita Cemetery. A few meters from Corrientes Avenue and Madero, you will find Luna Park Stadium, the cradle of the most important boxing matches and musicals.

In the trajectory from Alem to the Obelisco you will find the Opera, Gran Rex and Maipo theaters as well as a large number of independent theaters.

This part of the city never sleeps. It is the most active in the city and its marquees illuminate everything. Its streets are ideal places for walking, day or night.

On the other side of the 9 de Julio, on Corrientes Avenue, there are more theaters, including the Complejo La Plaza which offers different theatricals and musicals.

You will also find many bookstores along these blocks. Specialized bookstores offer new books as well as limited editions and rare books in good condition.

Corrientes is rich in traditional pizzerías. Las Cuartetas offers excellent pizza; its decor is original, but not at all elegant-in fact, it is rather ordinary.

If you are exploring the Center, you must visit the Colón Theater, re-opened in 2010 after a thorough restoration. The Colón is one of the best theaters in the world, renowned for its architectural beauty and its perfect acoustics.

As you continue along Corrientes, you will come to the area known as the Abasto, with its rich tango tradition. Carlos Gardel lived here and the Abasto has a museum in his memory. You might see a live tango demonstration or spectacle in the streets of the Abasto.

You can shop in Abasto Shopping, a shopping center that used to be a fruit and vegetable market. It still conserves its spectacular exterior structure. Inside are around 250 shops offering different brands and a variety of articles. 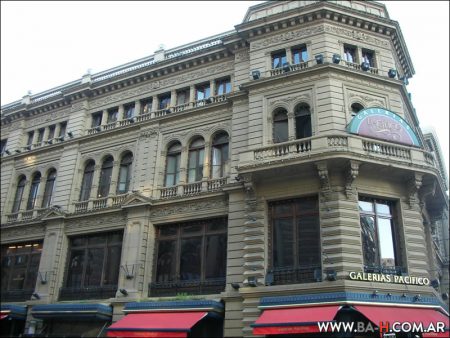 Florida is the most pedestrian, commercial and lively street in Buenos Aires. Nearly a million people (workers and tourists) walk up and down Florida every day. It is located in the Microcenter, the business district, and the best time to visit is around 3:00 PM. Here you will find all sorts of shops: the great stores like Falabella, exchange houses, shoe stores, leather goods stores, computer stores, souvenir shops, clothing boutiques, and eateries.

Besides, you can watch spectacles “a la gorra” when you visit Florida (music, tango dancers, magicians and fakirs, living statues, as well as art and diverse objects for sale on the street).

In the intersection of Florida Street and Córdoba Avenue, you will find the beautiful Pacific Galleries, an elegant commericial center of designer brands such as Tiffany, Polo, Ralph Lauren, Christian Dior, Tommy Hilfiger and Lacoste. The central coupola is of exquisite beauty and was declared a National Historical Monument because of its undeniable artistic value and its striking murals.

On Florida Street and the streets that intersect it, you will also find the central offices of all the city banks, exchange houses and financial companies.

Florida Street ends in the Plaza San Martín, a beautiful green space of 5 hectares, declared a Historic Place in 1942.

– Bring your camera. Charge your battery and make sure you have space on your memory card.
– You need comfortable shoes to walk in.
– Don’t forget sunscreen if you come in the summer (November, December, January).
– Buy some Argentine shoes or leather products but engage in comparative shopping first.
– Get a map of the City. Many stores offer them for free.
– Watch your things. As in every city, you have to be on the lookout for pickpockets. Don’t be afraid-be prudent.
– If you stop to watch a street show, don’t be distracted. Keep an eye on your valuables because when you are distracted, the “punguistas” -the experts in stealing without your realizing it- will take advantage of you.
– Have a cup of coffee in the Tortoni.
– Have a pizza in Las Cuartetas.
– You can save money by buying a sandwich and a soft drink in the snack shops along the way.
– If you visit the Plaza de Mayo or the Congress when a political demonstration is taking place, don’t be afraid. The police are always nearby.
– On Florida Street you will hear people shouting, “Cambio, Cambio” which means “Exchange.” These people, known as “little trees”, offer to exchange your dollars or euros for Argentine pesos. Never exchange with them. Go to an exchange house in a safe area.

+ Where to Stay in the Center of Buenos Aires (Downtown)

The options ae diverse, according to your preferences and to your budget. We can recommend Hostels, apartments or University Residence in Downtown Buenos Aires.