La Recoleta is one of Buenos Aires’ most attractive and elegant neighborhoods. It has many tourist attractions, and probably the most famous is the North Cemetery, better known as the Recoleta Cemetery. The cemetery opened its doors in 1822 as the first public cemetery in the City of Buenos Aires.

Family name are featured on the façades of their mausoleums. To be laid to rest in La Recoleta in the final status symbol.

For this reason, we can speak of an open-air museum: we find beautiful artwork created by Argentines and foreigners: angels and other marble figures, bronze used to portray the dead or adorn the doors of the mausoleums, symbolic and religious images and the greatest collection of stained glass windows in Argentina.

+ THE MOST VISITED TOMB | Recoleta Cemetery

Without doubt, the mausoleum most visitors to the Recoleta Cemetery want to see is the tomb of María Eva Duarte de Perón. Evita was a very active First Lady during Juan Perón’s first presidency (1946-1952). She fought for the rights of workers, women (through her efforts women obtained the right to vote in 1947) and children. The Fundación Eva Perón established schools (including a school of nursing), hospitals and homes for women, children and seniors throughout Argentina.
+ Read Evita Museum.

+ THE MOST DISTINGUISHED PERSONALITIES IN THE RECOLETA CEMETERY 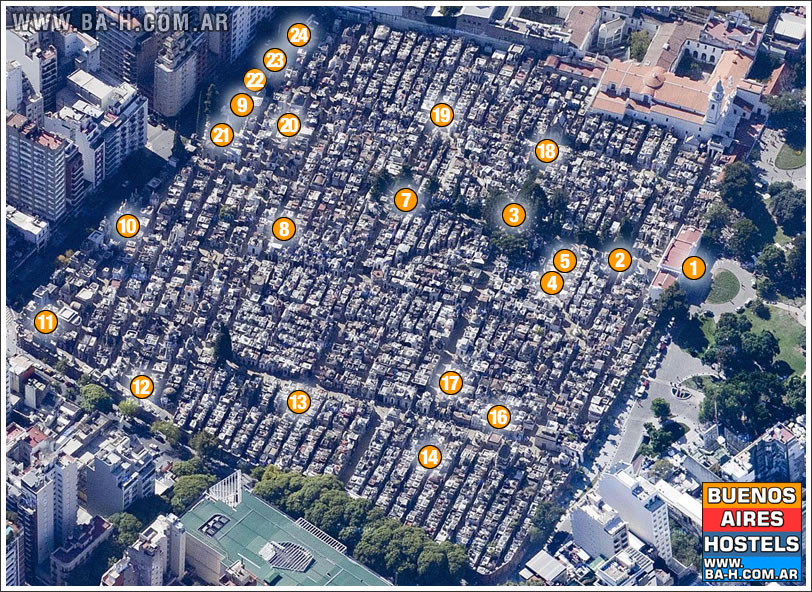 – In La Recoleta, luxurious mausoleums abound. Sadly, one also sees mausoleums and tombs in a state of total decrepitude. Bought in perpetuity, abandoned because no one is left to take care of them, they cannot be torn down.
– Because of its resemblance to an automatic teller machine, the mausoleum of the Herrera Noble family, owners of the Clarín newspaper, is known as Banelco (a play on “Bank”).
– The cemetery is full of cats. Some people believe that these felines can see things invisible to the human eye (which would explain their bizarre behavior).
Many Masonic symbols can be found because quite a few Argentine founding fathers and presidents belonged to lodges. You will see compasses, pyramids, pentagrams and squares.
– Myth, legend or fact? One mausoleum belongs to a young cemetery caretaker named David Alleno. His story is surprising because, as a man of few resources, he obtained a place in a cemetery designed for members of high society. Even more surprising, David is said to have committed suicide in order to inaugurate his mausoleum.

– Take your camera and don’t forget to charge your batteries because you will want to take many photos.
– Wear comfortable shoes.
– Sunglasses can be useful.
– Sunscreen can also be necessary since long exposure to sunlight can be risky.
– Be careful with your valuables (wallet, backpack or bag, camera, computer, iPad).
– You can visit La Recoleta on sunny or cloudy days. Different light will give different tones to your photos.
– Take time to visit the many other attractions in the La Recoleta.

+ WHERE IS TO STAY IN RECOLETA

You will find a complete list of lodgings in Apartments, Hostels and University Residences in Recoleta.